Writer's Block: Who's the bitch, now?

I've had writer's block since August. It may have started before the camping trip, maybe after, I can't recall right now because it felt like an eternity. The more I wished for that bitch to clear out, the more she dug in her heels. I tried to sit down and write, to force the voices in my head to speak again. 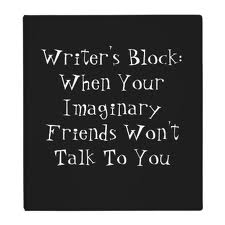 It was to no avail. I was stuck. The more I thought about it the more paralyzed I became. I considered starting a new story. I considered writing fanfiction. I considered giving up. All the while, the pressure mounted. How would I look my husband in the eye, in the face of his unending support, if the writer's block continued for months? Oh my Hell, what if it lasted a year? I have plans and dreams and I felt like I was watching them slip away from me, one tick of the second-hand-on-a-great Grandfather-Clock-in-my-head at a time. I did the only thing I could: I vowed not to write a single word for a week. 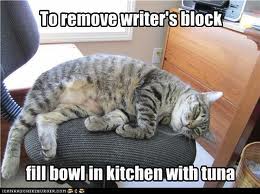 I don't have a cat, so that's not the problem.
The week passed, but the hand-wringing continued and the worry lines creased between my eyebrows deepened. Week two crept up on me and I continued my self imposed hiatus. Friends started asking if I'd made any progress. Each time I had to answer that I was still without words was like plucking my eyebrows. My eyes watered and my heart raced, and I knew I'd have to do it again. I had gotten to the point where my answer was curt and well rehearsed, laced with the implication that no further questioning was necessary unless you were ready to be done with child-bearing.
I'm not sure when it started. Thoughts trickling out of ink and lead onto napkins, notepads, and even the minute screen of my smart phone. It wasn't all the same voice. Two of my characters started to throw words at me, at times both perfect and inopportune. Sometimes phrases and sometimes in full sentences. Then, came the elusive full paragraph. It tapped it into the little yellow mock notebook on my phone. And I waited. I waited for her to tell me the rest of her story. I waited for redemption. It came today. Today was the day that the character whom had given me that fateful paragraph told me that entire scene. When she first began her flow, I stopped for a moment to wipe the tears from my eyes, partly to keep my daughter from asking if something was wrong (when really things were so, so right) but also because they were blurring my vision and making it hard to type as fast as the words were coming.
Fifteen hundred glorious words later I came up for air. (Take THAT writer's block. Who's the bitch, now?) Satiated and starved all at the same time. I couldn't get enough of the high that had evaded me for so many weeks. It's beautiful and lovely and altogether terrifying because I don't want to lose the flow again. For now, I'm going to shove that fear to the recesses of my mind and ride this high. I hope my husband understands if he is ignored for the next few days. I need this door to stay open and I need this character to keep talking, for a little while, at least. I also need a new laptop battery to keep up with her, so maybe you'll get another shopping post next week!
Posted by Annabelle Blume at 3:48 PM