Hey Friends! I'm so thrilled that I've been able to be a part of so many celebrations lately. Today is no exception. I am excited to share with you the cover for Debbie Peterson's next paranormal romance Van Locken's Witch. 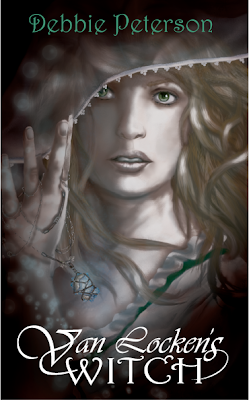 Kapitein Rand Van Locken has no idea what awaits him as he boards the Spanish galleon on behalf of the Dutch West India Company, or that the beautiful woman imprisoned within will change his life in ways he never imagined or even desired. Until now...

Lissa Capoen, didn't plan for the Spaniards to capture her while attempting  to rescue her sister. She didn't foresee the handsome sea captain coming swiftly to her aid and offering his assistance. Nor did she expect him to steal her heart and claim it as his own.

Yet, as destiny brings them ever closer together, Armando Manera is determined to recapture the witch and present her to the Spanish King. No matter what it takes...