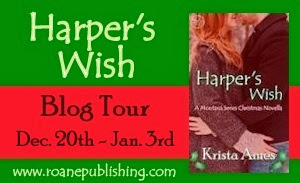 Not only do I get to participate in the blog tour for Harper's Wish, but I also got to review it! Keep reading below to find out what I thought of this holiday novella. And don't forget to enter the giveaway at the end! 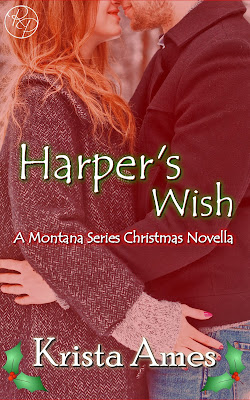 Christmas is supposed to be a joyous time of year, but for Harper Donaldson it’s just another day. Orphaned at an early age, she doesn’t have a single good memory of Christmas.

But, when a Santa’s Mailbox mysteriously appears in the lobby of the post office where she works as postmistress, Harper wonders what it could hurt to send her own letter to Santa.

Could he bring her the family she’d always wanted?

You can add Harper's Wish to your Goodreads List and it's
Available NOW at Amazon, Barnes and Noble, Kobo, Smashwords, All Romance eBooks, and Roane Publishing

I've even got an EXCERPT for you!


I just wanted to make sure you had everything you needed.”
“Holy crap! You scared me.” She stepped back with a hand over her heart and tried to catch her breath.
Fin came inside in all his shirtless cowboy glory and closed the door behind him. “Dang, I’m sorry. I seem to have a habit of doing that.” Warm palms wrapped around her bare arms.
His touch took away the chill, but created a whole different set of emotions instead.
She inhaled the scent of his aftershave and glanced up at him, noticing the ends of his hair, the color of burnished oak, were still damp. A vivid mental picture of him naked in the shower had her heart racing again.
Fin’s eyes darkened and, grew hungry, as if she were his next meal. Her gaze traveled to his lips, lush and begging to be kissed. The magnetic energy crackled between them, and her body swayed toward Fin’s bare chest. Her palms burned hot at the contact with his flesh. His lips crushed hers, setting her nerve endings on fire.
She returned his kiss with eagerness. Fin’s hands roamed over her back, then lower while she moved her fingers over his muscles with a feather-light touch and into his hair. Harper couldn’t fight the attraction a second longer. She sighed as his fingers fisted into the t-shirt she wore, edging it higher to reveal her smooth stomach.
“I’m sorry for being so forward, but I’ve wanted to do this since the moment I saw you.”
She expelled a soft moan of pleasure to encourage him.
Fin had the material around her shoulders when a knock sounded at the door—just before it started to push open.
“Hey, are you two oka—”

As you know, I'm a big fan of stories about potential lovers being snowed in together. It's a fabulous premise, if I do say so myself. So, when I got the chance to review Harper's Wish, I jumped at it. This story is wonderfully sweet with a dash of a spicy heroine and a hero with just a bit of salty cowboy to him. Throw in a little Christmas magic and you've got the perfect novella to heat up a cold winter's night.

I really liked Harper and her no-nonsense attitude. She's doing her best to build a life for herself in the aftermath of a rather heartbreaking childhood. As for Fin, he's adorable and committed to his family (his brother and nieces to be exact) which is a killer combination, in my opinion.

Fans of Contemporary Romance with a guaranteed spectacularly happy ending will adore this novella.

About Krista Ames:
Born and raised in Northern Indiana, Krista now resides in Northern Lower Michigan.  She is married to a very supportive man who allows her to follow her true passion of writing and never complains when she is pirated away on her computer for hours.  He is excellent at bouncing ideas around with and even helps the occasional writers block.  He’s also a terrific “in house” editor.  Krista is also a mother of 4 ornery children who keep her plenty busy.  With an addition of 2 beautiful chocolate lab sisters and a playful kitty, there is never a dull or spare moment in her household.

Krista has always loved to read and would often sit up for hours into the night not able to put down a book until she was finished.  She still reads when she can but her main focus is creating her own stories to share with the world.

She loves to communicate with her readers so please feel free to drop her a line anytime.
Visit Krista Ames on her Website ,  Blog,  Facebook ,  Twitter  and  Goodreads

Posted by Annabelle Blume at 6:00 AM