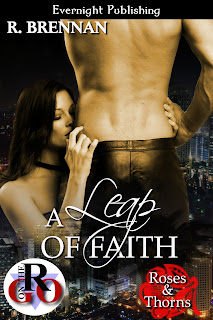 Leap of Faith by R. Brennan


New submissive, Faith Daniels is completely infatuated with her amazing Dominant, Richard Halstead, so when he sends her a summons via text message a full day before they had plans to meet, she can barely contain her excitement.

But, Richard didn’t just invite her over for a play date. Not this time. He has a proposition for Faith. One that could change the rest of her life.

Let me just start by saying, this short story is a five-alarm fire heat level. If you're looking for sweet and tame romance, just move right along because R. Brennan has brought some serious game with this hot little number. Leap of Faith is part of the "Romance on the Go" line; quick reads that get you where you wanna go, if you know what I mean and I think that you do. Having met Faith and Richard in their previous adventure as a part of the Evernight Publishing Vanilla-Free Christmas Anthology, I was eager to join them for another adventure.

This is a very hot, very naughty BDSM story. Lots of playtime punctuated by touches of tenderness and caring make for one fiery couple. Richard is the firm but caring Dom who saw what Faith had inside of her from the moment they met. He knows what she needs and he knows how to give it to her. Faith is a brave and daring woman, slinking into her new role as a submissive with unabashed passion. Their time together is not wasted on pleasantries and fake smiles; they get right down to the nitty gritty and make the most of their time together.


Strong hands grabbed hold of her kneecaps, startling her. Richard jerked her legs apart until she knelt in an exposed V position. His voice arrived close to her ear, sending a chill through her. “When I ask you to kneel for me, this is how you are to do it. I want you to display your desire. Show your need with the pride of a submissive. Do you understand me, Faith?”

Her body ached for his touch. The brush of his hand, the caress of a breast. Anything. She’d even welcome the slap of his paddle if it meant he’d touch her again. “Yes, Sir.” Her voice was little more than a hoarse whisper.

“That’s my girl.” He slid a finger along her wet opening. Half a breath later, she heard his lips smack together, as if he’d just finished eating barbeque ribs. “Sweet nectar.” His hand returned to probe her slit. A finger entered her.

A gasp of pleasure tore from Faith’s throat, contorting into a whimper when he withdrew from her quivering pussy.

He traced a fingertip over her mouth, coating her lips with the evidence of her arousal.
The carnal scent of her juices surrounded her, pushing Faith toward the mindless black abyss of wanton need. Her nails dug into the flesh of her forearms as she willed herself to resist reaching for him again.

Two fingers forced their way into her mouth. “Taste your desire.”

Faith sucked them clean, her tongue swirling sensually around each offered digit.

Richard abruptly withdrew his hand and moved away.

Solitude rushed in to fill the space he left behind, leaving Faith breathless.

He signaled his return a few pounding heartbeats later with the ‘snap’ of his leash on her collar. “Come, pet,” he commanded. 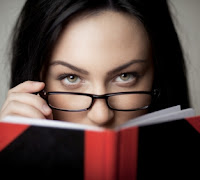 R. Brennan is a subbie brat with a bitch streak, an IT geek for the state of New York, and reformed gaming addict raising her daughters in the rolling hills of Upstate NY. (You know, where it takes a ten minute drive to buy a gallon of milk, and the smell of cows lingers on the breeze.) The brave are welcome to follow her blog: http://bexbooknook.wordpress.com or stalk her on twitter: @bexbrennan Often sarcastic, blunt, and NSFW, but usually entertaining.

Posted by Annabelle Blume at 2:26 PM