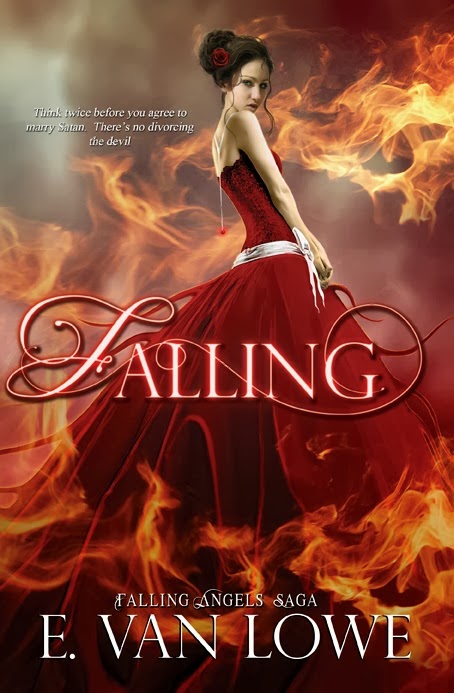 This, my friends, is Falling,  the final installment in the Falling Angels Saga by E. Van Lowe. I have been a huge fan of this series for years and it is bitter sweet to see it come to an end.

I was lucky enough to receive and ARC of this novel, and I tore through it like someone was going to steal it back out of my hot little hands.

As always, Van Lowe's story telling is seamless. We pick up after Megan has had an episode of "Bad Megan" showing up at school in her place, and she learns her alter ego has landed her in a serious pot of hot water. As Megan fights to keep herself from becoming Satan's bride, the twists and turns of the Devil's handiwork make the trials and tribulations of teenage life that much harder to overcome. With the help of those closest to her, Megan uses her smarts and her strengths to find an answer to the seemingly impossible fate before her, and learns a very valuable lesson about honesty and friendship along the way.

All of the saga's characters return, including Aunt Jazz  (who is forever my favorite), Harrison (who is always played by Matthew McConaughey in my head) and the frustratingly angelic Rocky (who I will never like), even Matt shows up when we least expect him.

In a sea of dark and gritty YA, E. Van Lowe's Falling Angels Saga gives readers a hopeful tale of love, friendship, and family. One of the things that makes me love this series so much is knowing that when my daughters get older, as they are eager to read about love triangles and the dark parts of this world, I can hand them this series and be confident that they are reading about a strong role model who learns and grows and loves – not just a boy – but her family, her friends, and most importantly, herself.

Falling releases on March 13th but you can add it to your Goodreads list today!
Posted by Annabelle Blume at 11:42 PM