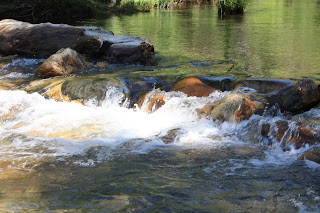 I've just arrived home from a four day camping excursion. After sifting through nearly one hundred emails and countless voicemail messages, I came straight here to share my adventures.   I'll never understand why people don't like camping. There is something so beautiful about having a breakfast of coffee and Swedish Fish, wearing nothing but a swim suit, slapping on a baseball hat instead of washing your hair and being totally unapologetic about it. Camping food, in general, is pure indulgence. How can anyone resist the allure of Easy Cheese and beef jerky? Not together, though. We tried that last year, it's not a good combo. Don't forget S'mores. Gooey, chocolatey, crispy S'mores. Yes, camping is heaven.

Of course, it's not all fun and games. We fought perilously against a multitude of Yellow Jackets, with some casualties along the way. Us, not them. Incidentally, I really wanted to call them tracker jackers, but knew that this would only cause the people around me to take away my Swedish Fish, so I refrained.
We also survived living in a trailer, a fifth wheel really, for four days. We had running water, a real toilet that flushed, and a kitchenette (because I'd go bankrupt eating out every meal). It's better than actually sleeping outside in a tent (eeeeffffff that) but still hard with three kids and two adults.  I'm small but my husband is a cross between Andre the Giant's height and the Jolly Green Giant's physique.  I lost count of how many times he hit his head on the trailer doorway.  Add to the physical challenges, the mental derangement of three kids, ages seven and younger, having little to nothing to do, save for bugging the hell out of each other. When I was lucky enough for them to be separated by way of geography, I was typically subject to my son's endless planning of which Transformer he would buy next and exactly how many chores he had to accomplish to reach his savings goal or my baby girl singing Paramore...endlessly.

There is a fantastic balance in life, though. Even the knowledge that I will suffer through the previously mentioned hardships, along with various other trials and tribulations, won't deter me from making this trip every year. The moments of awesome are too heady, too enriching to be overshadowed by giant, aggressive, attacking wasps or impossible sleeping arrangements.

This year did not disappoint. We spent the days fishing with a cheap cartoon themed fishing rod and more  light beer than should really be considered acceptable in public. Somehow, we fell into ridiculously traditional rolls, meaning my husband drank beer and fished but I didn't drink a single beer. Instead, I drank cans of soda with reckless abandon while I doled out sandwiches and snacks to the kids. How did this happen? I have no idea. Although I suspect it has something to do with the fact that I don't like beer.

My husband caught four trout, three of which escaped our pathetic excuse for a fishing rod. I also reeled in two sucker fish. I swear, if there was a World Championship of Sucker Fishing, I would own that every. single. year.  At the end of two very expensive days of fishing licenses, we caught exactly one fish.

One Rainbow Trout, about yea long,  was our boon. I was extraordinarily excited to walk our children through the realities of from where and how food comes to our plates. I grew up with fishermen and huntsmen. I have vivid memories of watching one of my uncles practice archery in my grandmother's back yard. The very woman who regaled me with stories of how she was cleaning a turtle for soup when she met my grandfather.

There is such a disconnect in modern culture between meat in the shiny plastic packaging and the animal who has given it's life. I know what you're thinking, but I am not a vegetarian and have no interest in being one. Rather, I am concerned about sustainability, about waste, about first world entitlement and about mass consumption at rates which are both shameful and unhealthy. My children were involved every step of the way with the journey of this fish, from reeling it in to cleaning it to watching me fry it up for dinner. We talked about how the fish gave up its life so we could benefit from the nourishment of it's meat. It was a important lesson. One I hope to repeat often and that they will carry with them throughout their lives, passing down that knowledge to their children, too.

Then there is the river. The river is beautiful. The noise of the rushing water and the wind rustling the trees, coupled with the simple silence being so far from the din of urban life, is breathtaking. To sit in the early morning light and take in the sweet smell of the earth under your feet and the musky scent of the previous evening's camp fires is to experience the perfection of man meshing with nature. It's how man was meant to live. And the crickets. The crickets are a symphony of happenstance that you  must experience at least one time in your life. If you're lucky, the sky might be gloriously clear and you can see the constellations mingled with millions of other stars as they blanket the velvety indigo above you.

Go camping, my friends. If not for you, then for your children. It's one of the most enchanting ways you can remind yourself what it means to truly be human. And don't forget the Swedish Fish.
Posted by Annabelle Blume at 10:01 PM